Would you like to know why a burning oil smell is entering your car’s cabin through the air vent? This is the guide for you. In this article, we will discuss the common causes of oil fumes coming through a car’s air vent and how to fix this problem.

Car vents are designed to help filter and circulate clean air in the car’s interior while driving which makes them really important.

However, when oil fumes start coming into the car through the air vents instead of clean air, this indicates a distinct issue with your vehicle.

Quick Answer: When a burning oil smell starts coming in through a car’s air vents, it most likely means there’s an oil or exhaust leakage somewhere in the car.

Burnt oil fumes are supposed to be released out of the car through the car’s exhaust and not through the air vents.

These fumes contain gases such as sulfur dioxide, nitrogen dioxide, and carbon monoxide.

Apart from making everyone in the car feel very uncomfortable, exposure to burning oil fumes can lead to serious health issues which makes it essential to fix this problem as soon as possible when noticed.

Let’s take a look at some causes of this issue.

Here are some causes of your car air vent smelling like burning oil.

1. Oil Leakage In The Car’s Engine

This is one of the major causes of the burning oil smell in vehicles. Especially when there’s a fault somewhere with the car’s engine, it will cause oil to leak.

Droplets of leaking oil will land on the hot surfaces of engine bay components.
This phenomenon causes the cabin to smell like burning oil.

Sometimes, this can be easily detected by visible oil leakage on the ground beneath your car.

2. Oil Leaking Through The Valve Cover

Oil leaking through the valve cover onto the exhaust system is another common cause of the burning oil smell in cars.

Unfortunately, these leaks are difficult to detect because the lubricant drops evaporate quickly and leave no trace.

Also, after a long period, the valve cover gasket may become worn and allow the lubricant to escape thereby filling your vehicle with that unpleasant smell.

The PCV (Positive Crankcase Ventilation) valve is installed on the valve helps to control and route the emitted unwanted gases from the crankcase to the cylinder instead. When the PCV valve fails, the valve cover is therefore subjected to increased pressure.

It can lead to its gasket and bolt being damaged which can cause oil to leak into the hot engine bay and emit a burnt oil smell.

Cracks or drains in the vacuum hose that connects the PCV valve are the cause of the bad PCV valve’s inactivity.

When trying to replace the oil in a car with a new one, oil spillage on the engine bay can result in the odor of burning oil being emitted which can enter the car through the vents.

However, this issue is mostly temporary, except there’s a leakage somewhere. After about two drives, the leaked oil should have completely burned.

When there is a break or crack close to the hot exhaust pipes, the catalytic converter, or the engine manifold, it can cause your car to smell like burning oil.

What To Do When Burning Oil Smell Enters Through Air Vents

When faced with this issue, there’s no need to panic as it might just be a minor issue. The first thing to do is try to find the cause of the problem.

In some cases, you can check for leaks yourself by checking underneath the car for oil leakage, spraying soapy liquid close to the tubular exhaust manifold to check for bubbles (this should be done when the engine is cooled down), and checking the PCV to see if it’s in good condition by placing your finger on it while the engine runs.

However, in most cases identifying the issue might be difficult if the fault is with the engine or gear in the car, except if you have an experience with car engines. If not, you should have a mechanic thoroughly inspect it.

Have the mechanic do a proper check for worn-out parts that need changing, gears, cracks, leaks, etc.

Also, try not to take any chances and wait for too long, hoping the issue will stop eventually. It might be a fault that can further damage your car if you don’t get it fixed as soon as possible.

Is It Safe To Drive My Car If It Smells Like Burning Oil?

It’s not advisable to keep driving your car if you notice your car’s cabin is smelling like burnt oil. Especially for a long period. It would be irresponsible to take such chances. You should check with the mechanic as soon as possible to find the cause and get it fixed.

Sometimes, it might mean a component in the car such as the brakes or tires being overheated, or probably a fault with the serpentine belt or even the car fuse. Whatever the case, when you notice this smell, you should turn off the engine and let the car cool down for some time before turning it back on. Then, take the car to your mechanic for diagnosis.

What Causes A Car To Smell Like Burnt Plastic?

This might be a result of an electrical short circuit in the car engine or wires melting in your car. Also, a worn or broken heater can cause your car to smell like plastic. You should see a mechanic as soon as possible to get your car checked and fix the issue. 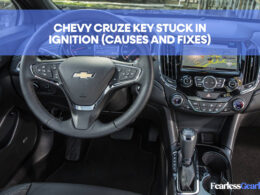 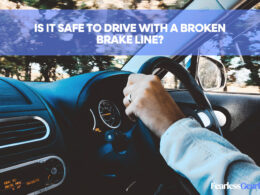 Is It Safe To Drive With A Broken Brake Line? 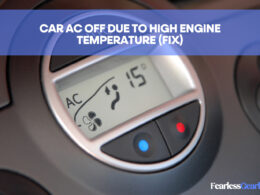 Car AC Off Due To High Engine Temperature (FIX) 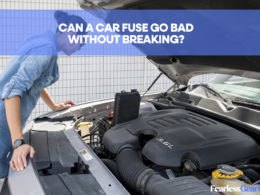 Can A Car Fuse Go Bad Without Breaking?